Skip to primary content
I’m always excited for a weekend adventure – especially if that involves a new place with new trails.  Enter a 30 hour trip to Malibu Canyon.
The drive to Malibu was pretty uneventful (other than an accident that resulted in an extra hour and a half or so).  Especially once I hit the 5.  I talked to my parents….joked with a friend about how I needed an uneventful fifteen mile sweep after last weekend’s craziness….sang along to bad 80’s and 90’s pop….all the things you typically do on a solo road trip.
Thanks to the traffic, I got to the hotel at least an hour and a half later than I planned.  But never fear, it was in plenty of time to watch the poor desk guy deal with two girls under the influence of something trying to figure out if they’d checked out of their room or not.  And how to use the wireless….and something about her ‘friend’ from ‘last night’.  Good times.  Can I just have my key?  After dealing with the girls and a broken computer, I finally had my key.  Then I was pretty sure I was asleep in moments.
The next day started with an early Starbucks run and a joke about me even sleeping at the hotel.  Thankfully the hotel, Starbucks, and the park were all pretty close, so it wasn’t that early – at least when you consider last Saturday I started running at 5.  We got our caffeine and headed out to the park.  As we were unloading and setting up, I noticed that the finish line was a mine-field of potholes.  All big enough to see, right?
Or not….at some point once the runners were off, but before I was supposed to start sweeping, I was walking over to the finish line.  I avoided all of the holes in the dirt.  Only to find the one in the grass…I love hearing my ankle pop.  Almost as much as I love grabbing ahold of the ropes holding up the finish line arch before stumbling into the arch.  Really?  Right now?  I tried walking it out and it was just sore, not really swollen.  Nothing an ankle brace can’t fix.  Perhaps I should have wished for an uneventful weekend….
And now for the course.  I love getting to see new trails in new places – especially places I wouldn’t necessarily go to on my own.  I had seen photos and heard it was hilly, so I strapped on my super cool ankle braces and was off.  Luckily, I wasn’t feeling too sore from last weekend’s debacle of a race or from my tumble and stumble at the finish line.
The first few miles were pretty gentle – some rolling hills and some flat.  A lot of course markings and thanks to someone’s ‘help’, a bunch of them were gathered in piles at one of the trail heads….
Just after the two mile mark, I came across a creek.  And, even with the drought, this one was flowing and probably would have come to mid-calf had I jumped right in (like I do with Redwood Creek).  Somehow, I managed to navigate through on the rocks without falling in and was able to keep my shoes dry for the most part (save for my right toes….ooops).

Shortly after the creek, I hit the first aid station and then began a climb that I thought would never end.  Beautiful views and a nice trail, but nearly seven miles of climbing with no reprieve was a tall order.

And then I was told by a mountain biker that I was at the top.  So, of course I stopped to take a photo and captured the below photo.  Looking back, I think the ones on the way up were better.

The next few miles brought place that I could definitely jog between ribbons and observe some cool rock formations.

Despite being told I was at the top, I came upon this monstrosity pretty quickly.  I was pretty sure it was straight out of The Hills Have Eyes, if you’ve seen it.  If you haven’t, don’t….At first, I didn’t even think it was a trail….then I saw the pink flags lining the way up it.  Really?  That’s a trail.  Well, ok.  I’m up for an adventure.  And the way up actually wasn’t too bad.  The way down….let’s just say I’m just glad I didn’t crash and burn.

Surviving the land of The Hills Have Eyes, I came up on the second aid station.  They were just as glad to see me as I was to see them.  After getting high-fives from the volunteers and the ranger, I refueled and headed off on what was pretty much the last climb before a nice descent back to the finish.
After what really was a nice gentle descent, the last section I hit was pretty flat.  Not sure if this was a good thing or not – right around mile 13 my foot (and the rest of my body), started to make it known that they were done with this running thing.  haha…almost legs, almost.
Near the 10k turn around, I passed through the MASH site.  It was pretty cool, despite not having watched too much MASH.  I don’t think I really watched any of it until after Alan Alda was on ER and I’m pretty sure those were reruns.  Anyway, I digress.  I paused for a bit to get some photos before the volunteer asked me if I was planning to get in before dark.  Right.  Dark.  Yeah, I should probably keep moving.

After departing the MASH site, it was a quick jaunt back to the start/finish.  A quick load of the van and I was off on the long journey home.
Once I got out of LA, I was ready for some food.  Enter my second Carl’s Jr. fix of the weekend.  I’d also warmed up enough to want an Oreo milkshake.  Yum.  While I waited for the drive-thru, I decided to check out my foot again.  It had been out of the brace for about an hour and felt pretty stiff.  Probably because in the time it had been resting it decided to start swelling.  Awesome…well, at least it wasn’t my driving leg.
I stopped for gas in Kettleman City.  At that point, my feet had been shoeless for several hours and the thought of having to put them back on was worse than the thought of being barefoot (or in my case, bare-socked) at a gas station – especially with my now swollen left ankle.  So, I channeled my inner Britney Spears (circa 2004) and pumped gas sans shoes.  But, I did have socks on and I didn’t go in the bathroom.  Haha… 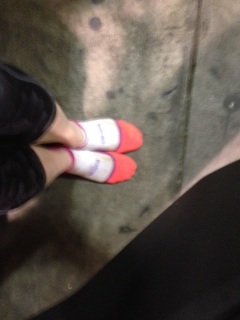 The rest of the trip passed uneventfully and I made pretty good time getting home.  Home, showered, beered, and in bed by 12:30.
Until next time….over and out.