First, big thank you to my Aunt Mary for the blog title idea.  Second…I’m not even sure where to begin with this one.  What an epic day – Way Too Cool 50k, my first race since North Face, hopefully the first one I’d finish in over a year, and the first in my lottery of pain this spring.

So, on to the race.  As instructed, I got there early….really early.  The running joke is that I’m always early for the Coastal races (or course marking…and then I get lost, but I digress).  I took this to a new level.  Packet pick-up opened at 6.  I drove in at 5:30, right into some rockstar parking.  I was glad I had the hiking socks, rain boots, and rain jacket with me for the walk to check-in.  It was short, but wet.  They let me check in early and soon I was back in my car for a short nap.  Thank you rain for lulling me back to sleep for a bit.

I woke up an hour later, and to my surprise, it had stopped raining.  And…wait…is that the sun trying to come out?

In the non-rain, I made my pre-race pit stop….again, being early is key.  No waiting at 7:15.  Then, it was back to my car to figure out what to wear.  I was so afraid of getting too cold and having another issue like North Face, so at first I took my black Marmot jacket and tied it into my pack.  Then, I thought long and hard…it wasn’t raining.  It was pretty warm.  I might need that space to strip off some layers.  So, I left it.  Good decision.  While I didn’t strip off any layers, I definitely didn’t need it.  I headed to the start in my SF Run Company tank, SF Run Company quilted long-sleeved thing that’s usually too hot to run in, a Nike vest (maybe down?), an a white windbreaker (no idea who made that).  Vest and windbreaker were new….so much for the nothing new on race day….staying warm is more important.

Epic Parking.  I was equally close to the finish.

I was so glad it wasn’t raining at the start…I think that would have made it pretty tough to get going.  Once I started running, my nerves turned into energy and I ran the entire way down the pavement (knee, please forgive me) to the trail. The first four or so miles were really congested – single track and lots of people.  Had to go slower than I wanted in some places, but more often, I found myself forced to keep running when in the past I would have walked.  I briefly wondered if this would cause me a problem later in the race, but also thought it might be just what I needed.

While I was glad it wasn’t raining at the start, apparently staying dry wasn’t in the cards.  As I approached mile 2, I could hear people cheering and the entire pack seemed to slow down.  Up ahead was the first of many creek crossings.  Knee deep water.  At mile 2.

The remaining miles of the 8-mile loop passed in a blur and before I knew it, I was back at the start/finish.  I was glad to see an aid station and grabbed some electrolytes and a rice krispie treat (not my favorite race food).  I had been thinking about stripping off a layer, but in the end, decided to keep them all on.  Of course, by now, it had started to rain.

Next aid was only 3ish miles away and mostly downhill.  I was shooting to maintain a 4 mph pace for the entire race, and a quick check on time told me I was about two miles ahead of that.  I decided to worry about the end of the race later and go with it.  So, off I went.  After a little more uphill….down we went.  It was a little sketchy, but I found myself far less skittish than I’ve been in the past.  I hooked on to another runner and followed him down the hill.

I also met a runner who I’ll call Brazen Mike (he had a Brazen Racing hat on, so that’s how I was identifying him before he introduced himself).  We traded places off and on through about mile 15, I think.  Miles 11-15 were probably my least favorite part of the race.  Trail was pretty flat, and they were some of my fastest miles of the day, but I really liked the single track, especially once the crowd had thinned out.  It was also almost completely exposed and it had started to rain harder.  But, the other runners were friendly and we got each other through.

I felt like I spent a lot of time hiking between 11 and 21.  It was rolling and I ran a lot of the downhills and hiked the slight uphills.  At some point, I decided I needed to hike it out for a bit and surprised myself at how fast I could hike.  I kept asking people if they wanted to pass me….and generally, they didn’t.  One guy told me he was going to follow me the rest of the race and let me hike him in at a PR.

Somewhere between 18 or 19 and before the aid station at 21, I started to lose it.  I was tired…and sick of slogging through the mud.  And the creek crossings.  Oh the creek crossings.  Was there ever going to be an end.  I think somewhere in there is where I almost went swimming…thankfully, another runner grabbed my shoulders from behind and kept me upright.  The journey to the aid station seemed very long and I was desperate for some electrolytes.  Or something.  I wasn’t really sure.  Maybe just the desire to be 10 miles from the finish.  But, in typical ultra fashion, the five or six of us grouped together got each other through.  Kudos to the guy who helped me down the very, very steep switch backs to the aid station.  My legs were tired.  I was hurting.  It was slick, steep, and had I been closer to the end, I may have just tried to slide down on my butt.

I thought I might be in trouble, but that aid station was like magic.  First, I realized a two things: one, I was going to blow my previous 50k time out of the water (2014 Tamalpa 50K…8:45).  I was still two miles ahead of my goal pace.  And two, I might actually come in ahead of my goal time.  Then the volunteers gave me chicken broth.  AMAZING.  I shook out my legs, chatted with a couple of the other runners I’d run down there with….one of them told me that if I was an hour ahead of where I’d been before, of course my legs hurt.  Then he reminded me not to waste my hour.

So, off I went.  And that chicken broth….I think it actually was magic.  I got Mathew Wilder’s Break My Stride song stuck in my head, and I just went for it.  Jogged along, barely noticed the pouring rain, passed people (me?!), and felt really good.

Then just before mile 26, I hear, ‘Great job, San Francisco’!  It was one of the ladies from LA that I’d met before the race.  We started the slog up to the infamous Goat Hill together before I lost her.  And Goat Hill…it was surprisingly inconspicuous.  I was expecting a sign…or something.  But it wasn’t until I confirmed with one of the local runners that it was in fact Goat Hill.  And, it was steep.  It was muddy.  It was….surprisingly not that bad.  Thank you Fox Trail repeats.  My goal was to get up the hill without stopping.  And I did…I didn’t even really think about stopping.

I got to the top and was greeted by a bunch of volunteers.  They were great – refilled my water, gave me some electrolytes, and some more broth.  And…was that, Larry?!  It was!  There was Larry, who works some of the Coastal races making soup.  He gave me some tips  on the rest of the course and I was off.  Even though I was soaked, I didn’t give my drop there a second look.

I wish I could say the next three miles were super easy and I kept up the great (for me) pace I had going.  But, they were some of the muddiest, slipperiest, miles all day.  So I walked a lot.  Many times slower than I wanted to be…and I had the energy to run.  That was a first.  But, I knew I was going to come in with a good for me time.  A better for me time wasn’t worth the risk of injury.

I slipped and sloshed my way to the next aid station – hiking where I had to, forcing myself to run where I could.  I could hear trainer Tom’s voice in the back of my head, ’empty the tank!  this is the last of your run today’. I’m not sure why there was another aid station with only 1.4 miles to go, but it was nice to see.  The crossing guards were surprised at how fast I was walking, which made me smile.  Once I was out of the mud, I was able to jog over to the aid station for some electrolytes and soup.  One of the guys was like, that’s amazing, isn’t it?  I said it was, and he said great…now get out of here…1.4 and you’re done.

And, what a 1.4 it was.  Some short, steep, climbs up….rocks….more mud.  More walking than I wanted, but I was going to get in by 7:30.  I could hear the finish before I saw it and due to the mud, didn’t get to run in as much as I wanted.  But, I did run the last piece along the road, made a right turn….decided to roll my ankle.  Awesome.  Only me.  Thank you ankle brace for saving it, even if it is a little sore now.  The nearby spectators all cheered and yelled, ‘nice save’ as I righted myself and jogged through the finish line. 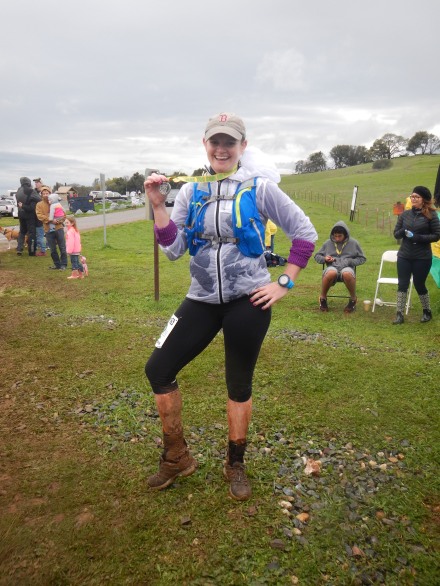 I wasn’t really sure what to do once I finished.  It’s been so long since that’s happened it was a little emotional.  I got a medal and someone handed me a cliff bar maybe.  Not sure, I tucked it into my pack.  I got one of the volunteers to take a photo….you can’t get that muddy and not document it.  Even if I am the queen of layered running tops.  haha…I dried off, changed clothes, and enjoyed the finish line celebration.  Got the frog cupcake I’ve been thinking about for months along with a post-race beer.

So, where does that leave me?  Other than pretty sore at the moment?  Haha.  It leaves me with a vote of confidence for Lake Sonoma.  It leaves me knowing that despite having more work to do, my training plan is working.  It leaves me hoping that my second race in the lottery of pain will go as well as my first.

Big thanks to all of the volunteers – being out in the rain and cold is no small feat, but you all did it with smiles on your faces and were just what I needed to see at every aid station.  Thank you to trainers Robin, Tom, and the rest of Orange Theory for teaching me that I can push a lot harder than I thought I could both in class and out.  And to Dr. Hal, for putting me back together again and talking me off the race ledge this week.

Until next time Way Too Cool, until next time.  When hopefully it’s not raining.  I’d love to see what I can do if I can actually run the last six miles.